At some point, just like humans chickens can become a bit under the weather from time to time. It’s natural when caring for chickens that at the slightest change in a chook can send many keepers in a flap.

From time to time you may experience a soft shelled egg. This tends to be more common amongst young pullets and is caused by the egg passing through the hens system too quickly thus not allowing the shell to harden.

If it becomes frequent, it may be that the hen is lacking calcium in their diet or vitamin D which assists calcium absorption. I have 2 ex-farm hens who lay massive eggs but the shells have never been great in quality and it’s these two that lay the soft-shelled eggs quite occasionally.

Possible remedies
As I have not experienced this in my hens to date here are a few tips I have picked up from reading various literature and scouring websites.

An egg bound hen is a rarity but it can happen. An indication that a hen may be egg bound would be the frequency with which the hen visits the nest box without laying and may appear to be in distress. The egg can become stuck if too large and the hen is unable to pass it.

Possible remedies
As I have not experienced this in my hens to date here are a few tips I have picked up from reading various literature and scouring websites. 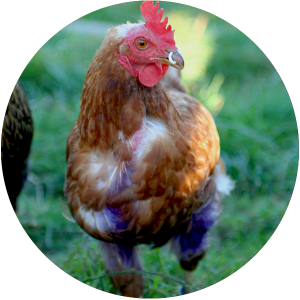 One of the hens I got from the farm that sometimes lays soft-shelled eggs arrived with a massive bald spot on her neck, under-carriage and bottom. I assumed that the feathers would grow back now that she was in a better environment. However my existing hens discovered the feather pecking habit and began to peck the odd feather from her. I’m assuming that hens tend to be quite inquisitive but not that bright and were intrigued by this red patch of skin on the hen and so decided it’d be good to peck.

After a while I realised her condition was not improving and as winter was on it’s way, I decided she needed a hand to ensure she had enough coverage to keep her warm in the cooler months.

Hens can sometimes peck feathers if they are lacking protein but as mine have a good basic diet consisting of layers mash, worms, slugs and the occasional cheesy treat I ruled this factor out.

It’s pretty much inevitable that at some point in the year your hens will attract these little critters especially if they free-range.

Red mite usually come out at night and will run along the perches and onto the hens. Then when it’s daylight they scurry off into the cracks and crevices of the coop again.

Red mite, lice and fleas all like the nest boxes so it’s best to change the bedding frequently. They’re more active in the warmer months so keep an eye on your hens. If they appear to preen themselves a lot or if they go off lay, these little pests may be the cause. Your hen may also look jaundiced due to the loss of blood taken by the parasites.

This is also caused by parasites who crawl under the scales of the legs of the hens causing them to lift. In serious cases it can cause the hen to become lame and unable to perch. It’s with this reason that scaly leg should be treated ASAP before it becomes serious. Regular checks on the hens legs will allow you to spot this problem early. The hen may appear to be pecking at her legs due to the irritation and may also appear listless.

You should worm your hens regularly as it is better to prevent this than having to cure it. However some say de-worming a healthy hen weakens their system and un-balances the natural amount of bacteria in the hen. In my opinion you should ideally worm hens every 4 to 6 months but keep an eye on the droppings incase you spot any signs of worms appearing.

I use a product called Verm-X and you can get it in different forms like pellets and liquid. You can get other worming products that come in a powder form which you add to the hens feed. I began using this but then turned to the liquid version as the hens tend to scatter the feed and I couldn’t be sure whether they were getting the right amount of worming formula.

Hens suffering with worms will appear listless and have green diarrhoea and you may even spot a worm in the droppings. You may see a drop in the hens weight and condition and their egg shells may be of poor quality.

This site has been designed to offer tips, advice and a guide to keeping hens. When I started out on the daunting task of preparing for life as a hen keeper (for eggs and as pets) I struggled to find information on the web and often found myself submitting questions on hen keeping to numerous forums. I am in no way an expert but I want to offer nuggets of advice which I have picked up along the way on areas which I have experienced and had to deal with. Hopefully you'll find this of some use.

With the recent recession affecting a lot of people, self-sufficiency is becoming more of a popular thing and keeping chickens can offer a valuable source of food and nutrition whether its from the eggs they produce or the chicken themselves.